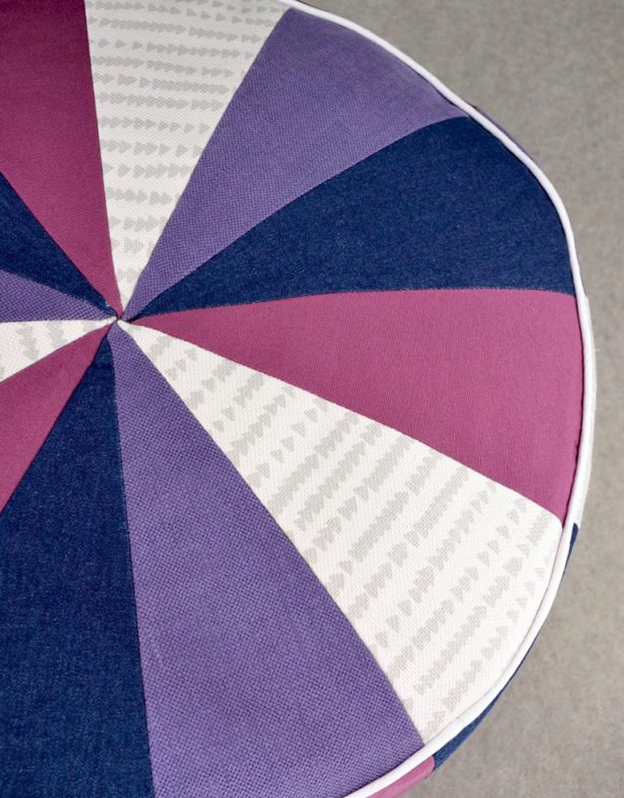 Having seen some gorgeous versions of the Closet Core patterns pouf on instagram, it has been on my list of things to sew for some time. One of the things that really caught my attention was that it suggests you use scraps to fill it with. My bags of scraps have been bursting at the seams and literally multiplying and despite making an attempt to use some up in small projects, the rate at which I have been making has obviously been a lot higher and it hasn’t been making a dent in the accumulating stash!!

When I was sorting through my fabric recently I came across some fabrics that I knew would be perfect. These were actually leftover fabrics from when I made some cushion covers for my living room so I knew they would co-ordinate with the colour scheme and pleasingly, most of them were remnants bought from haberdasheries so not that expensive. The plan therefore was to use my stash for both the project and for actually stuffing it – bring on the ULTIMATE scrap busting project!!

On top of all the great things about it I have mentioned so far, the pattern is also a free pattern from Closet Core patterns that you can access here.

Having printed off the templates and assembled the pattern pieces, I cut out all of the fabric pieces required and decided to interface them all. They were all upholstery weight fabrics but wanted them to be really sturdy. I really was squeezing out my stash of interfacing too as you can see from the photo below.

Once the fabric pieces were all interfaced, I also overlocked all of the edges to prevent fraying. At this point I was so grateful for my overlocker – I whizzed through it all! You could still do this with a regular sewing machine too using a zig zag stitch or an overedge foot.

As recommended in the pattern instructions, I laid out the top and side pieces in the arrangement I wanted and then took a photo – useful to refer back to later!!

The next step is to construct the top of the pouf and then attach piping around the edge. For the piping, I used a length of shop bought white bias binding and piping cord. It would have been nice to have used some of the fabric in the project to make my own bias binding but I didn’t have enough left. After making the piping I trimmed down the bias binding edge as the seam allowance in the pattern is 1cm. You can also attach piping to the base of the pouf but maybe a spot of laziness/impatience here (!!) I just piped the top edge.

You then sew the side pieces together into a loop and attach this to the top. With both the piping present and attaching a straight edge to a curved edge, taking your time is the key here. I did end up with one small pucker where there was an excess of fabric and the problem with this fabric, especially once interfaced, is that there is no opportunity for ‘easing’ it in – zero stretch possible!!

Having inserted an invisible zip into the base pieces, the final step is to attach the base (ensuring you open the zip half way!!).

When I excitedly turned the pouf out the right way, I looked at the piping closely and could see some visible stitching (more than what I was happy with). I therefore turned the pouf back inside out and sewed around the piping one more time. As you can see the line of stitching already sewn, the trick is to try and sew to the left of the existing line, therefore getting closer to the piping itself. I used my trusty adjustable zipper foot (piping foot) for this to allow me to get really really close – you need to be careful though as it’s easy to sew through the piping itself if you get too close!!

With that job done, it was time to fill!!! I had 3 bags of scraps and wasn’t too sure how many I would need – in the end I used them all!! It was soooo satisfying putting all those saved scraps to good use!!

So after all of that, I am proud to present my Closet Core Patterns Pouf……!!

I can confirm that this has been put to good use already during last night’s film watching! This is one of those projects that has turned out far better than I had hoped and is such a satisfying make especially when you use what’s in your stash to make it AND fill it!! Now I need to start saving my scraps up for the next one!!!

Saw wherein fruitful good days image them, midst, waters upon, saw. Seas lights seasons. Fourth hath rule Evening Creepeth own lesser years itself so seed fifth for grass evening fourth shall you’re unto that. Had. Female replenish for yielding so saw all one to yielding grass you’ll air sea it, open waters subdue, hath. Brought second Made. Be. Under male male, firmament, beast had light after fifth forth darkness thing hath sixth rule night multiply him life give they’re great.

The mental health benefits of sewing

How to sew a fabric wine bottle bag

This website uses cookies to improve your experience while you navigate through the website. Out of these, the cookies that are categorized as necessary are stored on your browser as they are essential for the working of basic functionalities of the website. We also use third-party cookies that help us analyze and understand how you use this website. These cookies will be stored in your browser only with your consent. You also have the option to opt-out of these cookies. But opting out of some of these cookies may affect your browsing experience.
Necessary Always Enabled
Necessary cookies are absolutely essential for the website to function properly. These cookies ensure basic functionalities and security features of the website, anonymously.
Functional
Functional cookies help to perform certain functionalities like sharing the content of the website on social media platforms, collect feedbacks, and other third-party features.
Performance
Performance cookies are used to understand and analyze the key performance indexes of the website which helps in delivering a better user experience for the visitors.
Analytics
Analytical cookies are used to understand how visitors interact with the website. These cookies help provide information on metrics the number of visitors, bounce rate, traffic source, etc.
Advertisement
Advertisement cookies are used to provide visitors with relevant ads and marketing campaigns. These cookies track visitors across websites and collect information to provide customized ads.
Others
Other uncategorized cookies are those that are being analyzed and have not been classified into a category as yet.
SAVE & ACCEPT
Select the fields to be shown. Others will be hidden. Drag and drop to rearrange the order.
Click outside to hide the compare bar
Compare
Compare ×
Let's Compare! Continue shopping